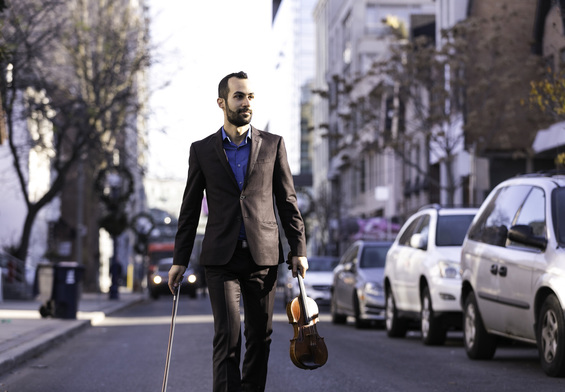 Born in Tehran, Bijan Sepanji is a Canadian-Iranian performer and educator who is based in Toronto, Canada. As a member of the Ton Beau String Quartet, Bijan regularly performs new compositions by Canadian composers as well as well-known classical works by 18th, 19th and 20th century composers. So far, he has performed concerts in Ontario and Alberta, as well as in China, Turkey, Iran, Italy and the USA.

In the past two seasons, Bijan performed a number of concerts and gave masterclasses with The Ton Beau at the University of Lethbridge in Alberta, Vanderbilt University in Nashville, Tennessee as well as in Chicago, Illinoise. In addition, Bijan also performed a violin recital and offered workshops in his hometown, at the University of Tehran as part of a composition competition for the students of the university.

Having trained at Indiana and McGill universities, Bijan’s orchestral experiences include performances with Indianapolis and Kitchener-Waterloo symphonies, as well as with Sinfonia Toronto, Espirit Orchestra (Toronto), London Symphonia, Hamilton Philharmonic and the Toronto Concert Orchestra.​
While at Indiana University, Bijan's interest in string pedagogy led him to study with Mimi Zweig and Brenda Brenner, two well-respected string pedagogues in North America. Bijan's teaching principles are based on the teachings he received at Indiana University Bloomington, as well as the two Suzuki Training Programs he has attended more recently. This knowledge, and a decade of teaching ​strings has allowed Bijan to become an effective and highly sought-after teacher in Toronto and North York. He is a certified Suzuki teacher and a member of the Suzuki Association of the Americas (SAA) and the Suzuki Association of Ontario (SAO).
Bijan is also the conductor of the Mooredale Youth Orchestra, conducting and working with the junior strings division and preparing them for three diversely-programmed concerts a year.